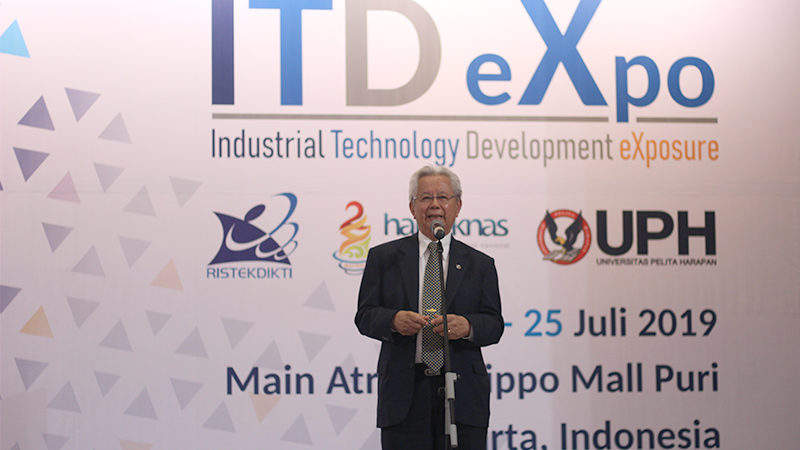 Jakarta, 24 July 2019 – The Ministry of Research, Technology, and Higher Education (Kemenristekdikti) in collaboration with Universitas Pelita Harapan (UPH) organized the Industrial Technology Development (ITD) Expo Year 2019. UPH, as a private university that has served for 25 years, committed to supporting the government program to improve the development of science and technology and to innovate in higher education in Indonesia. UPH collaborated with Director General of Research Enhancement and Development Kemenristekdikti in organizing the exhibition of industry-worthy research products.

Director-General of Research Enhancement and Development Kemenristekdikti Muhammad Dimyati, in a press conference, delivered his hopes that ITD Expo will heighten understanding and knowledge of the people towards government policies and programs in supporting research, and deliver information regarding research-made technologies that have a potential to benefit the people and economy. He also hoped that this exhibition will improve the research culture into something good and coordinated so that implementable innovations can be created and promoted in the national and international world of industry.

Regarding this collaboration, UPH Chancellor welcomed the invitation by Director General of Research Enhancement and Development Kemenristekdikti in organizing this exhibition.

UPH Chancellor remarked, “UPH received the honor of holding the Industrial Technology Development Expo 2019 to introduce industry-worthy prototypes. UPH hopes that through this program, other parties will participate in research activities and prototypes for the sake of development of science and technology and technology-based industries in Indonesia.”

Previously, UPH has also collaborated with Kemenristekdikti to promote neurosurgical processes with 3D electronic media. The technology-based method of teaching aspiring doctors has been introduced at UPH through a talk-show open to the public.

On this occasion, Dimyati reported a prototype of PPTI and Insinas.