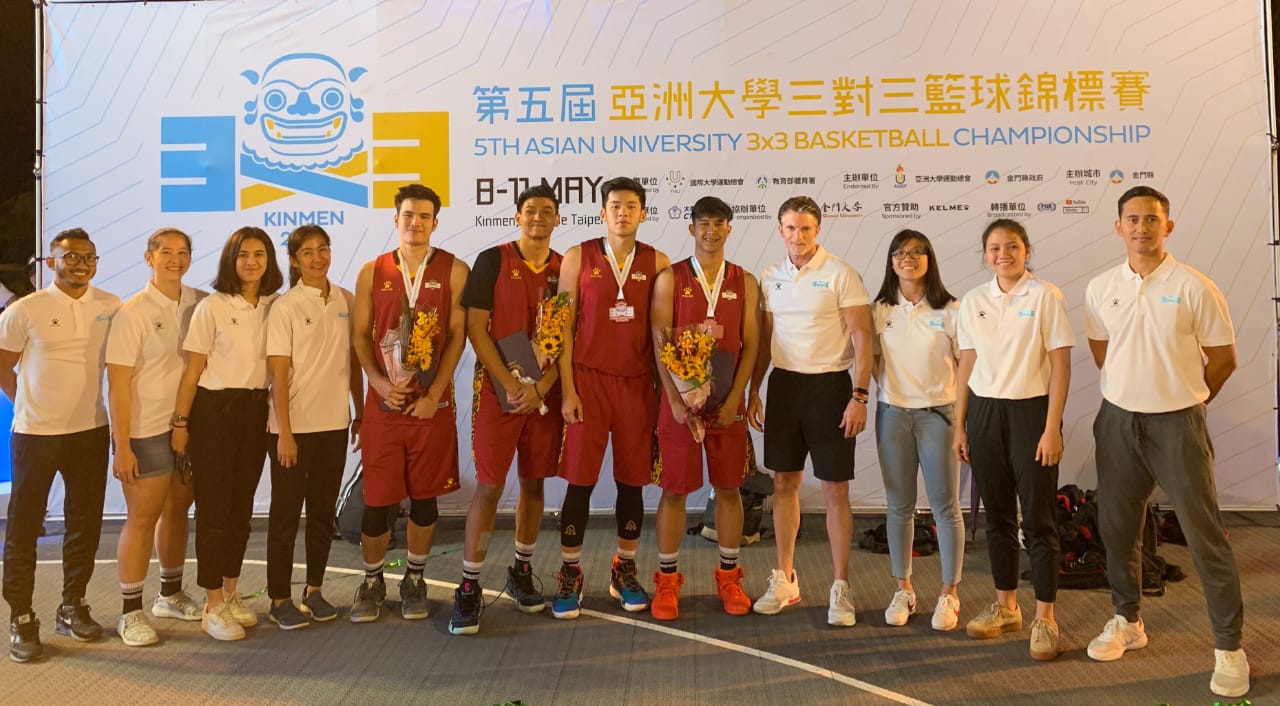 Once again, the basketball team of UPH Eagles has won yet another international competition. The team has won 3rd place in the Asian University Championship (AUC) 2019 in Kinmen, China, Taipei on May 8-11, 2019. The 5th Asian University 3×3 Basketball Championship was followed by 20 men and women teams from the various university across Asia. UPH has been chosen by PERBASI (Indonesian Basketball Association) to represent Indonesia and has successfully come as the 3rd winner after Mon-Altius Physical Education Institute (FISU), Mongolia, as the 1st winner, and Fu Jen Catholic University (FJCU) Taipei, as the 2nd winner.
Following is the score for Eagles Men 3×3 team in the four matches during the preliminary round:
UPH vs Fu Jen University-Chinese Taipei: 19 – 17; UPH vs University of Macau: 21 – 16; UPH vs San Pedro College: WO; and UPH vs Culture University of Hongkong: 21-12. For the semifinal, UPH vs NNCU of Taipei scored 16 – 13.
UPH has decided to send men and women 3×3 teams, and the two has given their best performance.
“We play so well against Hongkong, and we will be facing Mongolia in the final four. Of course, we are going to give our very best,” said Stephen Metcalfe, the coach of Indonesia’s 3×3 team in a media interview, as cited from Bola.com on Friday (10/5).
‘Coach Met’ thinks that his team has to be aware of the Mongolian basketball players’ amazing speed. “We have to be really cautious because their movements are very neat, but our postures are generally bigger than them so we have to take advantage of that in the 3×3 game,” said Coach Met.
UPH’s 3×3 team has consisted of Rivaldo Tandra Pangesthio (Management 2014), Erick Jonathan Gosal (Management 2015), Patrick Nikolas (Management 2016), and Muhammad Arighi (Food Technology 2017). The four of them worked together to make sure they could make it to the 3×3 World University League and that Indonesia became the winner.
However, unfortunately, the women team are still not lucky enough to reach the final four. “We won against Macau and Hongkong, but unfortunately we lost over Taipei and China. So, this year we are unable to go to the final four,” said Cesar Wilhelem, the assistant coach.
This achievement is a great addition to the list of UPH Sport’s international achievements in basketball; some of them includes 8th place during the 2nd Asian University 3×3 Basketball Championship in Macau 2016, 5th rank during the 3rd Asian University 3×3 Basketball Championship di Malaysia 2017, and becoming World’s Best 10th in 3×3 Basketball World University League di Xiamen, China 2019.
Hence the achievement, the Eagles is always preparing for another competition such as the Student League (LIMA) Competition in Jakarta on July 2019 and National Students’ Sports Week (POMNAS) in September 2019. (rh)