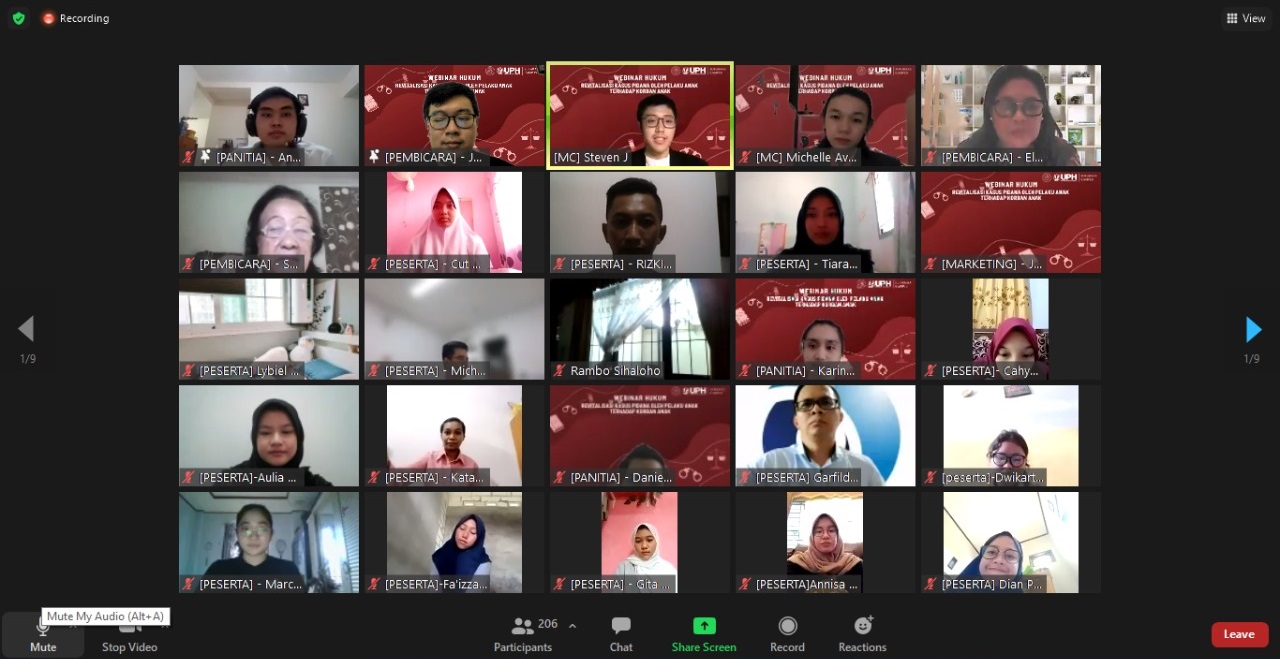 In recent years, widely reported on criminal acts that performed by the child, where the child is considered to be minors legally against other children. Several well-known survey institutions in Indonesia show that criminal acts committed by children have continued to increase from year to year starting in 2015. This shows that the understanding of the punishment of children among the community has not been maximized or evenly distributed. Therefore, socialization regarding the punishment of children must be sharpened, both with preventive purposes so that children’s crimes can be minimized, and the purpose of good recovery to the perpetrators so as not to repeat these actions. This also will restore the victims due to the actions of the perpetrators. As millennials, we should not be indifferent to the punishment of these children because surely, most of us will eventually have children too.

This webinar is hosted by Michelle Avrilla and Steven Jonathan. Participants who attended amounted to approximately 200 people, from various regions and networks. This webinar was opened with remarks from Mr. Dr. Ronald, ST, MM, CSMA., CDM., PMA. as the Executive Director of UPH Surabaya Campus and continued by Andrian Nathaniel as the Head of the Webinar.

The next session was delivered by Dr. Elfina Lebrine Sahetapy SH, LL.M. Mrs. Elfina raised the title Equilibrium between Human Rights Enforcement and the Existence of Responsibilities of Parents, Society, and the State. In this second session, Mrs. Elfina said that basically children’s rights are still within the scope of human rights, but they are regulated more specifically because children cannot be equated with adults. In juvenile criminal justice, the age limit for a child to be convicted is above 12 years and under 18 years. This is regulated in Law no. 23 of 2002 jo. UU no. 35 of 2014 concerning Child Protection and Law no. 11 of 2012 concerning the Juvenile Criminal Justice System. Mrs. Elfina also explained some of the rights of children even though they are criminal offenders and the criminal limits that can be imposed on children based on the applicable laws and regulations. To achieve the goal of restoration for perpetrators and victims of child crimes, there are needs to be a real contribution and synergy between parents, society, and the state. Parents can rehabilitate, society does not discriminate against children in conflict with the law, and the state can provide adequate facilities and infrastructure for children such as LPKA, LPAS, and LPKS.

Then the last session was closed by Mr. Joshua Evandeo Irawan SH, MH entitled Diversion in the Juvenile Criminal Justice System. In this closing session, Mr. Joshua explained that diversion is a form of restorative justice in the juvenile criminal justice system. Mr. Joshua explained what diversion is, what are the goals of diversion, and what cases can be pursued for diversion. Furthermore, he also explained more about how diversion can be carried out along with the steps that must be followed during the diversion. Mr. Joshua closed the session by quoting his mother’s words, “Even though you make mistakes, you are still my son. When you do something wrong, you must admit it and apologize, you have to work it out, you have to learn, and you have been better. Mama is always with you!”

All participants were very enthusiastic in participating in this webinar. This can be seen from the number of questions entered in each session which will then be responded to by the speakers after the presentation of the material is complete. Hopefully, this webinar that has been held can provide a good education for all participants.

Don’t forget to join in other webinar programs from the Law Study Program at Pelita Harapan University which will be held every month. The closest one is a webinar on August 20, 2021, with the title “A Reflection on the 76 Years of Independence of the Indonesian Nation”. For Indonesia, the enforcement of trademark law in border areas is something relatively new. It takes years of learning from several countries that have… It has been 76 years since our nation, Indonesia, has experienced the independence that the people have worked so hard to achieve. During these 76 years, many…