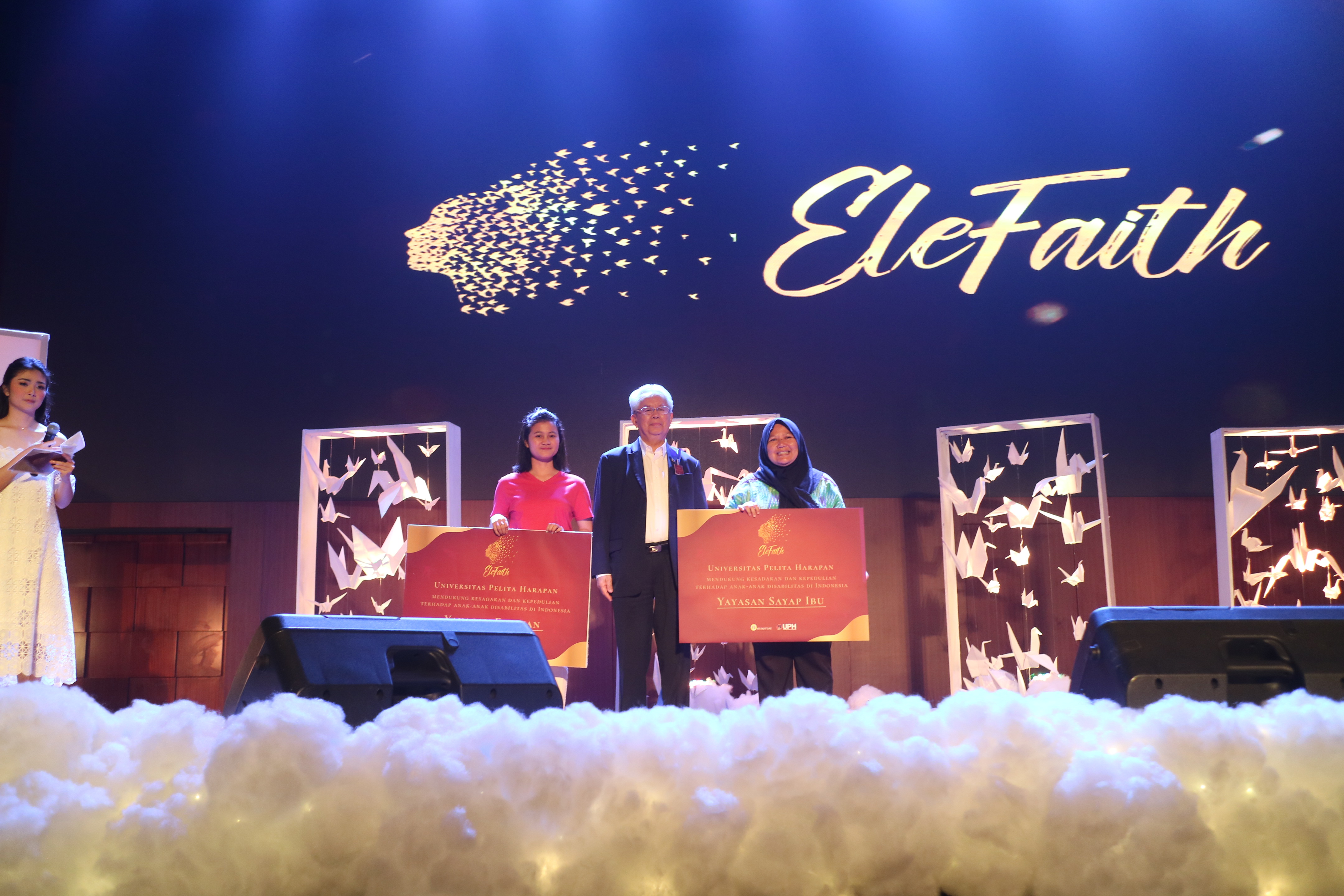 “Children with disabilities are limited, and they have to be treated with care and pity – they are social objects, not subjects in the society.” This popular notion is what the students of Universitas Pelita Harapan (UPH) try to eradicate through UPH Elefaith (Elevating Faith) 2019 – “Your Life is Precious”. The rally for an equality of rights also acts as a support system for people with disabilities that participate in the 2019 General Election. This event is deemed necessary to support the demands of people with disabilities – to be recognized for who they are, and to be regarded as human beings bearing the same rights as everyone else.
Elefaith is an annual event held by UPH student service, under UPH’s Student Life Department. The event focuses on contributing to the society. This year, UPH collaborates with Yayasan Sayap Ibu and Yayasan Elsafan and conducts several activities along with people with disabilities. This is hoped to boost their confidence, as well as to fuel their enthusiasm.
The series of events started on February 2019 and ended with a fund-raising Charity Concert on April 11, 2019. The concert was held on the Grand Chapel of UPH Lippo Village Campus, and funds were raised through ticket sales, audience donations, transferred donations from non-audiences, food and drink sales at the Grand Chapel lobby, and the ‘Elefaith’ shirt sales. All of the funds raised were given to Yayasan Sayap Ibu and Yayasan Elsafan.
The donation was symbolically granted to the Foundations by the Rector, Dr. (Hon) Jonathan L. Parapak, M.Eng.Sc. at the Charity Concert. Dr. Parapak took his time to attend and personally commend the event.
“With its holistic education, UPH looks to train students not only to pursue knowledge, but also to pursue character. One of the most important values to learn is to hold on committedly to the values of life. This event shows that our students have learned to care about our brothers and sisters with disabilities. In addition, this proves that our students have the ability to execute the event, and can display their achievements,” the Rector said of the event.
Andri Panjaitan, S.T., M.T., the Director of Student Life, echoed the Rector, saying that Elefaith is one of the ways the campus can motivate its students.
“We want Elefaith to become a sort of motivation for our students – we want them to see that the people that God allows to have disabilities are equally capable of doing valuable acts for the society. We try to show this value throughout the Elefaith events. The concert itself involves 227 students from various Student-Led Activity Units, Organizations, and study programs,” Andri Panjaitan, S.T., M.T., explained.
Elefaith is much more than a celebration. Andry believes that an event this big should also be an opportunity for students to train their soft skills. They have to continually hone their leadership abilities, relational skills, and, most importantly, they have to bring an impact for others.
“The most valuable thing that we want to take out from this event is how our students can show tangible contribution – both for themselves and for the wider society. Impacting lives – this is the final goal,” Andry emphasized.
The concert attracts around 800 participants from UPH, external audiences, and invitees from both Foundations, and featured non-stop music and dance performances by UPH students. There was also a collaboration between UPH students and Yayasan Elsafan, where they played music and sang ‘Andai Aku Punya Sayap’. Those playing and singing want to show that children with disabilities have the exact same potentials as everyone else in this world.
Amiria Lala, Coordinator of Yayasan Elsafan, expressed her gratitude for the program. “UPH students voluntarily visit us – to play, learn, and share stories with the Elsafan kids. The concert is also such a booster for our kids. We are very grateful, and we hope that UPH continues to show the utmost care for people with disabilities,” Amiria said.
Monique Gabrielle and Olivia, Head and Vice-Head of the Production Team, respectively, hope that every one of the audiences, including UPH students, can increase their awareness towards people with disabilities. In addition, they want people to realize that they are special and full of potential. There should be no more pitying and objectifying – what’s needed is a supporting attitude towards people with disabilities that will help them maximize their potentials. The Indonesian government is currently prioritizing the development of human resources for the next five-year period. It is imperative that human resource…