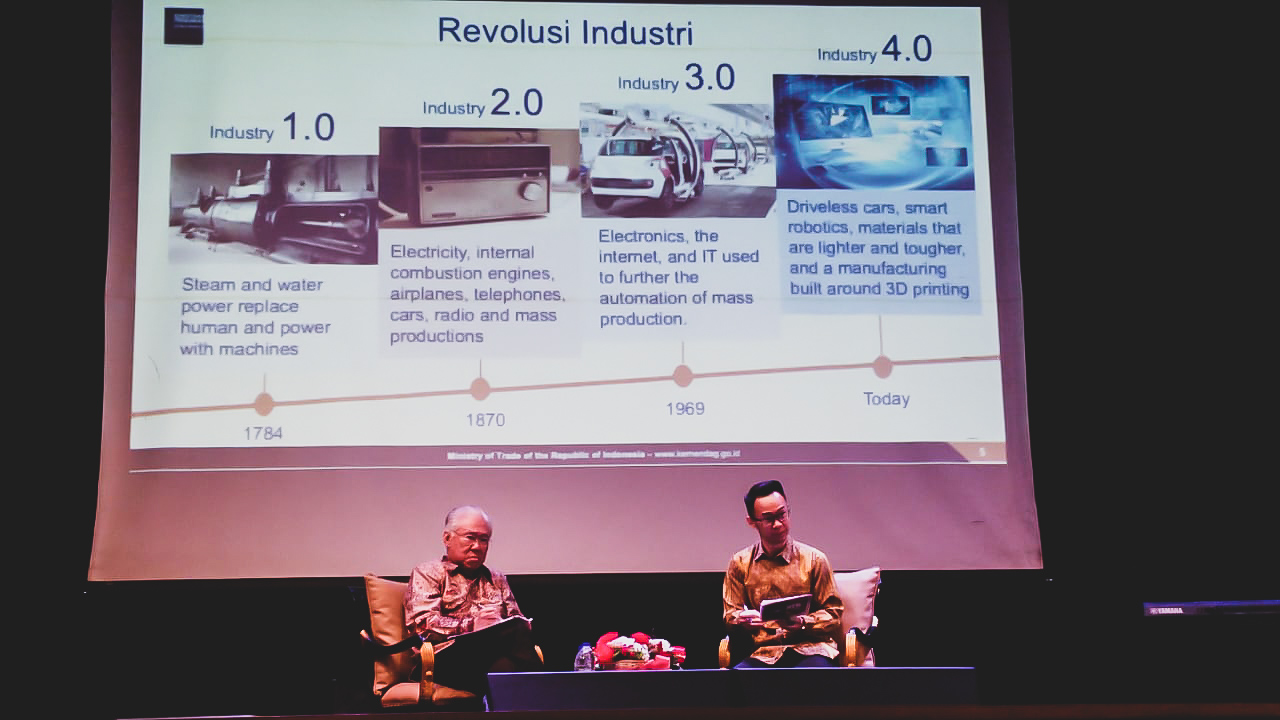 Indonesia has a vision, that is to become a country with a fair and adaptive economy. At the Business Talk Show (23 March 2019) held at the World Harvest Dome, Karawaci, Dr. Drs. Enggartiasto Lukita, Indonesia’s Minister of Trade, discussed developments in the world of business that rallies to this vision. Leading with his theme, titled “Seeds of Opportunities”, Dr. Lukita motivated promising university students, who aspire to become entrepreneurs, to be brave in searching for job opportunities in the Industry 4.0 era.

As Dr. Lukita talked about the “Entrepreneur’s Passion in the Industry 4.0 Era”, he explained how Indonesia’s current development in economic matters spurs the need for a fair economy, one that is realized by all the people. To quote Dr. Lukita in the matter, he said, “Indonesia’s current economic vision is to become fair and adaptive through the help of technology’s growth and development. This will shape an efficient economy that exists for the people.”

Dr. Lukita also explained how, in reality, the 4.0 industry reveals the importance of entrepreneurship to the people. In particular, Dr. Lukita invited the students, because they are of the millennial generation, to take an active role in promoting a fair economy in Indonesia. He added, “I would like to invite university students do not have a closed perspective. You must see outside the box, or in other words, to your surroundings. This way, you will definitely see the economy’s progress in development and the people’s needs, helping you spot the opportunities that will improve our economy. We want an equal economy that will prevent economic gaps. That is why, you, as the millennial generation, should take the chance to start your own business as entrepreneurs while helping the Micro, Small and Medium Enterprises (MSME) in keeping their quality.”

In relation to the importance of entrepreneurship, Dr. Lukita explained that the government wants to make a change by improving education for human resources. He reminded the academics to constantly be a part in improving the quality of Indonesia’s human resources, to quote, “The Institute of Education must be improved so that there will be an improvement in the quality of human resources. The learning process must be centered on the students. Education itself must change. The professors must not only impart knowledge but also develop the students’ critical thinking. If Indonesia’s education doesn’t change, we will all be fools in the end.”

At the end of the talk show, UPH’s Chancellor Dr. Jonathan L. Parapak, as representative of UPH’s ranks of rectors and professors, gave a plaque as a sign of appreciation to Dr. Lukita.

The Business Talk Show continued with five other speakers. Prof. Dr. Ir. Adjie Hoesodo and Daniel Hermansyah led the second session with the topic “Raise the Bars”, while Peter Shearer Setiawan and Waasi Sumintardja raised a theme of “Multiply the Chances” in the third session. The second session ended with a discussion of the development of Indonesia’s digital economy.

The Business Talk Show was moderated by Johan Jang, M. Si., M.Pd., who is a professor of Entrepreneurship and Marketing in UPH Business School. It became the highlight of UPH’s Business Week 2019 “Unlocking Potential”, which was held by the Business School Students Association on 18th to 23rd March. Through this talk show, the committee hoped that all participants gained a better understanding of the digital economic development in Indonesia and are able to be brave in building a business in the modern age.

Johan Jang, as a moderator and a Business School professor, stated that the contents of his talk show are sure to help the students. He explained, “BTS did not simply give an image of Indonesia’s economic and entrepreneurship condition, but also enrich the knowledge of future businessmen or women as they promote a fair economy. The speakers challenged the students to create a business that is not only profit-oriented but also a business that will help them who needs it. This is something that must become our main goal, as people who are given the blessing and opportunity by God.”

Other than discussions led by various sources, this event was attended by more or less 150 participants. They were also entertained by UPH’s student performances, which included performances from the Hana Union, Art Band, Nathania Jualim, and Raynaldo Wijaya.