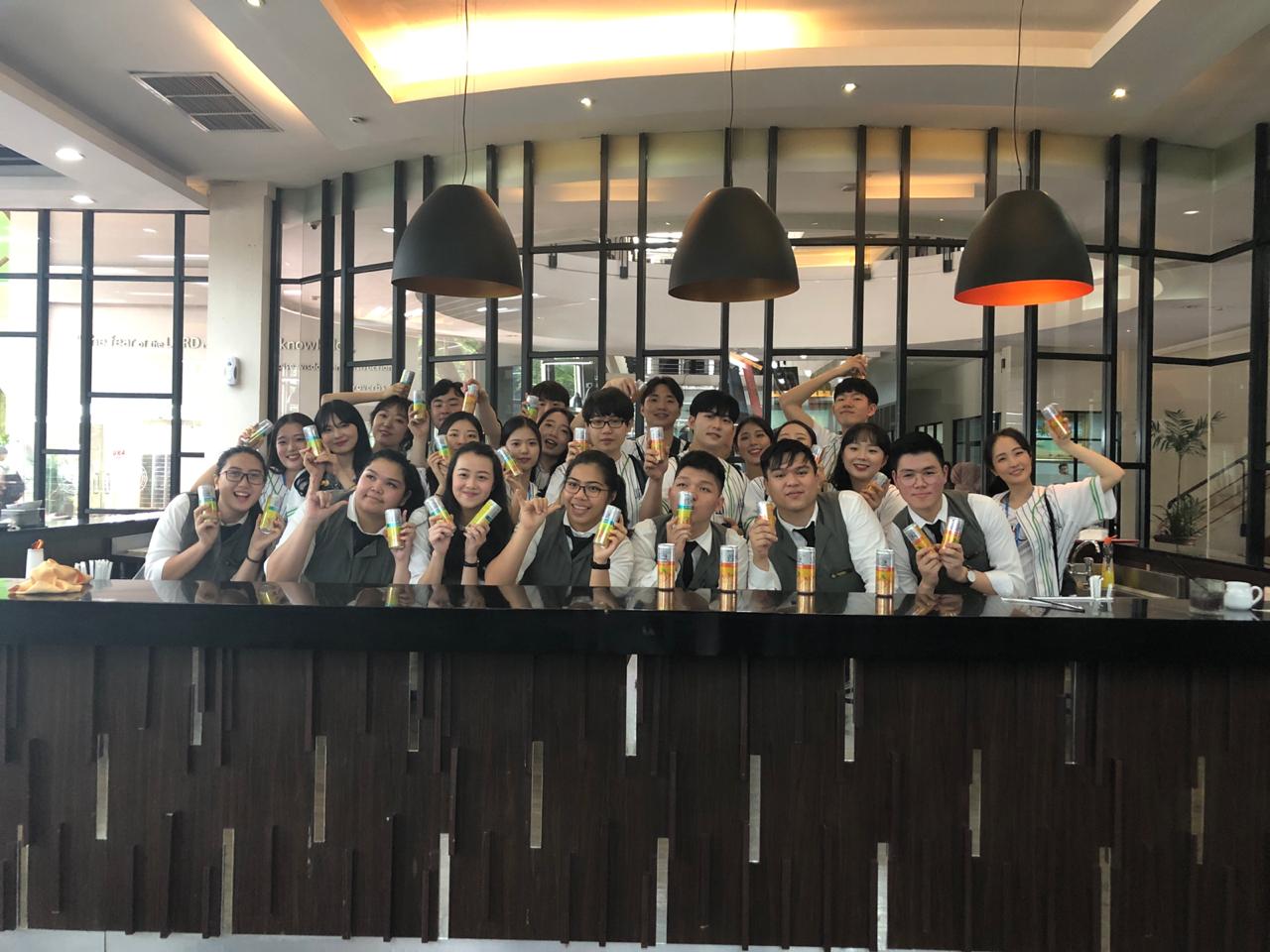 “UPH is a university with the complete package as an educational institution. What we, the Heonz Corporation team, and the Korean students who came to visit Indonesia, need are fulfilled here in UPH,” said Verly Elinda as the Marketing Manager of PT Heonz Royal Jaya who talked about the reason why Heonz finally picked UPH as the only university it visits with the 16 Korean students that are guided by the company. The visit was held on January 16, 2019 at UPH Lippo Village.

The complete package that Verly means is the good environment that UPH has, an area that is not to large but is equipped with complete facilities, especially with its Hospitality Management Faculty that focuses on culinary and its Faculty of Food Technology that has a great lab. From this aspect, as a company that works in the Food and Beverages (FnB) field, Heonz think that it is the right choice to choose UPH as their destination for field study. Especially, UPH has students with various backgrounds, which makes it an even more complete package.
Verly explained that the purpose of doing a field study in UPH is to observe the characteristic and market for the products that runs under PT Heonz Royal Jaya’s distribution. Heonz itself is an import and distribution company of 2 South Korea’s renowned products, namely Samyang and Dong-A. As a beginning of their relationship, Heonz brought their beverage product, Dong-A, as the basic ingredient for a Mocktail Workshop which was held with the Hospitality Management Faculty.

“We are very glad and enthusiastic of the warm welcome and creative ideas of UPH team in managing this event so neatly. The participants are very pleased to join the Mocktail Workshop as well as to interact with the students here who taught them how to mix various beverages from Dong-A with other ingredients to create a signature drink. Moreover, the students from Korea have also been equipped with brief knowledge about Indonesia, thus this interaction will surely enhance their knowledge about Indonesia,” Verly explained.

The arrival of PT Heonz Royal Jaya along with 16 Korean students were warmly welcomed by Dr. Curtis J. Taylor, Vice Rector for Academic Affairs, who admits that Korea is one of his favorite countries.

“I have gone twice to Korea and comparing it to Indonesia, it surely is a different thing. Indonesia is a country with great diversities in culture, religion, tribes, and in many other things. This becomes a challenging aspects for Indonesians to think about how they should maintain a good interaction with other people. Unlike the Koreans who are more likely to be homogenous. One other important thing is how Indonesian see religion as an important aspect of the society,” said Curtis.

Just like Curtis, Shirley Novita Yauwhan, Manager of UPH International Office, corrects the fact Indonesian is a country that adhere to principle of divinity or religion, which is reflected in the first point of Pancasila. Aside from that, Shirley also talked about the different aspects of Indonesia such as, demography, variety of tribes and languages, foods and its characteristic of modesty (the dos and don’ts). It was also interesting to see the Korean students to be so active when they were taught about several words in Bahasa that are commonly used in daily conversation.

Looking at the whole event, both PT Heonz Royal Jaya and also UPH hopes that in the future, there will be more opportunities for collaboration like this with an even more creative and more useful material for both parties. (mt)