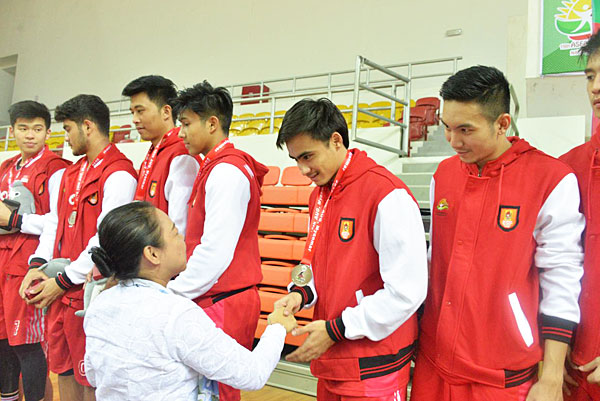 Just recently, UPH’s basketball team, the Eagles, had managed to achieve second place on the ASEAN University Games 2018. This wonderful achievement was obtained after winning matches against 11 other universities in a game in Naypyidaw, Myanmar, on December 7-19, 2018.

Rev. Stephen Metcalfe, MA. as the coach as well as the executive director of UPH Sports, who has been coaching the team for more than 15 years, said that the journey and process towards this achievement is not an easy one. For 8 years, Metcalfe has proved to the government that UPH sports are worthy enough to represent Indonesia in an international scope, and this aspiration has finally been realized with UPH Sport’s team being able to represent Indonesia in the ASEAN University Games 2018 on December. With constant achievements for the past 8 years in the National Students Sports (POMnas) biennial match, UPH has proved from time to time that its sport’s team is indeed special, and different from the others. It has been recorded that UPH Eagle Sports has become the second winner in 3 POMnas’ competitions consecutively, and has also become the first winner to defeat other teams from various provinces of Indonesia.

“Each province gets to send its all-star team, but not us; since the very beginning we have always wanted to send one family of the UPH team to represent Banten. It is not easy in the beginning, because the government demands a very high commitment from our team by proofing our successfulness. So for 8 years, we have tried to proof our quality by wining every match in Banten. Finally, at the end, Banten’s government trust us and said that UPH is allowed to represent Indonesia,” said Metcalfe.

Surely, this opportunity could not be wasted, with the departure of UPH Eagle Sports team to represent and bring pride for Indonesia at the ASEAN University Games 2018 until the team’s victory as the second winner in ASEAN level after a tight competition with Thailand, UPH Eagle Sports has surely proved its worth.

This achievement did not only represent Banten and Indonesia, but also UPH and its student athlete.

“We went to Myanmar to represent Indonesia, but we’re just a team from UPH who are faced with the best players and the professionals of many ASEAN countries. One thing that differs UPH’s team and the other participants is the student athlete’s originality. This is very different from the players from other countries. That’s what made us special!” Mr. Met, as how people usually call him, then added.

Metcalfe himself also admitted that the preparation for this competition is not too different compared to their regular practice. The team, which consisted of UPH’s student athletes, still have to prioritize their studies. Each morning, the student athletes have to practice before they go to class. Metcalfe also emphasize the importance of consistency and perfection every day, when there’s a match and also when there isn’t.

“Moreover, from this achievement we get the opportunity to represent Indonesia at the World University Games in Italy on July 2019. We don’t just aim to win. We know that we will have to face more teams who are better than us. But the opportunity to compete at the highest level possible, there is nothing beyond that,” said Metcalfe.