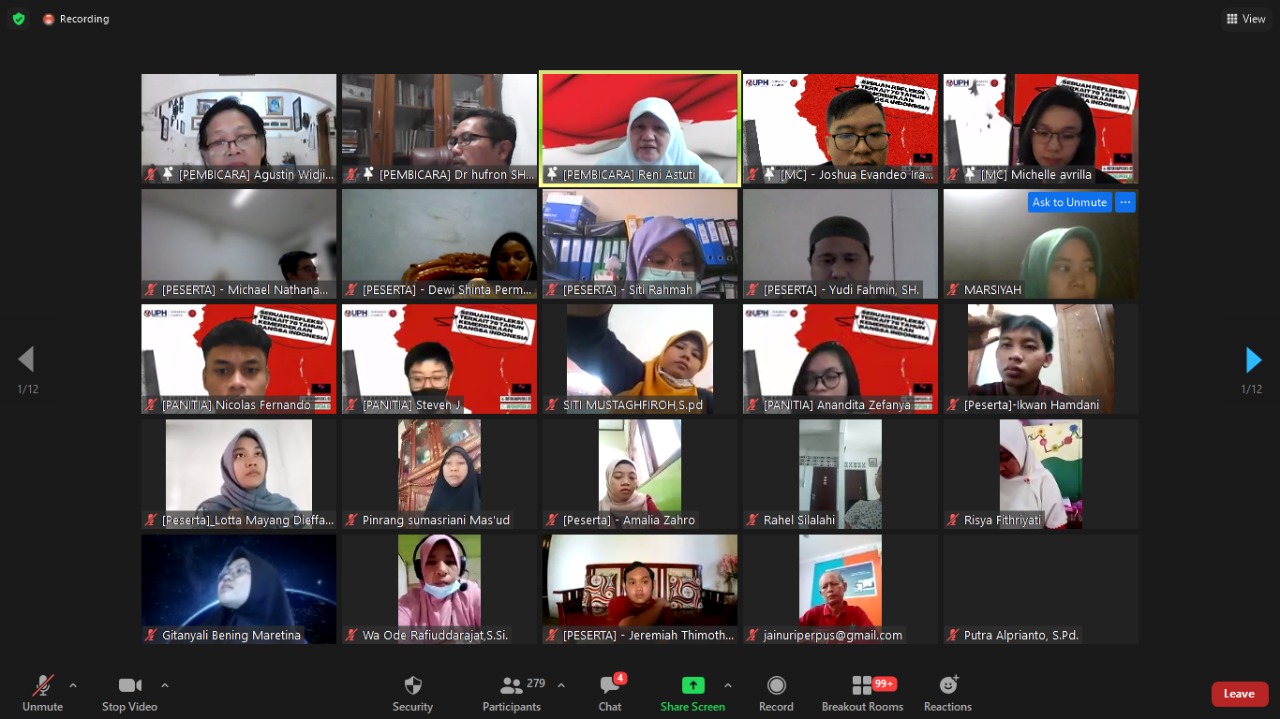 This webinar was hosted by Mr. Joshua Evandeo Irawan, S.H., M.H and also Michelle Avrillia and was attended by approximately 268 participants. First of all, this webinar was opened with remarks from Mr. Dr. Ronald, S.T., M.M., CSMA., CDM., PMA. as the Executive Director of UPH Surabaya Campus and continued by remarks from Dr. Agustin Widjiastuti, S.H., M.Hum as of the Law Study Program at Universitas Pelita Harapan, Surabaya Campus.

Then the event continued with the first session hosted by Mrs. Reni Astuti, S.SI. On this occasion, Mrs. Reni as the Deputy of the Surabaya City DPRD or Regional House of Representatives who represented the government and delivered material on how the contribution and responsibility of the government was related to the independence of the Indonesian nation for 76 years.

After seeing it from the government’s point of view, the webinar continued with material presented by Dr. Agustin Widjiastuti, S.H., M. Hum. On this occasion, Mrs. Agustin brought material on how the juridical review of the responsibilities that have been carried out by the government related to 76 years of Indonesian independence.

After seeing it from the government’s point of view and also the lecturers/lecturers, the last session was closed by Dr. Hufron, S.H., M.H, who this time raised it from a legal point of view. Where Mr. Hufron brought material on how to realize legal protection regarding government responsibilities related to 76 years of Indonesian independence.

Participants seemed enthusiastic about participating in the webinar hosted by these three speakers. The enthusiasm of the participants can be seen from the questions from the participants that were submitted to the resource persons which were then responded to by the speakers after all sessions had ended. The Law Study Program Student Association hopes that this webinar can make the participants reflect on the 76 Years of Independence that Indonesia has achieved.

Don’t forget to always stay informed for other programs that will be made by the Student Association for Law Study Program at Universitas Pelita Harapan, Surabaya Campus because there will be many activities that have been planned, from webinars to other programs that are also informative and useful. The closest thing is that there will be a webinar that will be held again on Friday, September 24, 2021, with the theme “Cross Border Measures of Alleged Brand Infringement at the Border”. In recent years, widely reported on criminal acts that performed by the child, where the child is considered to be minors legally against other children.…