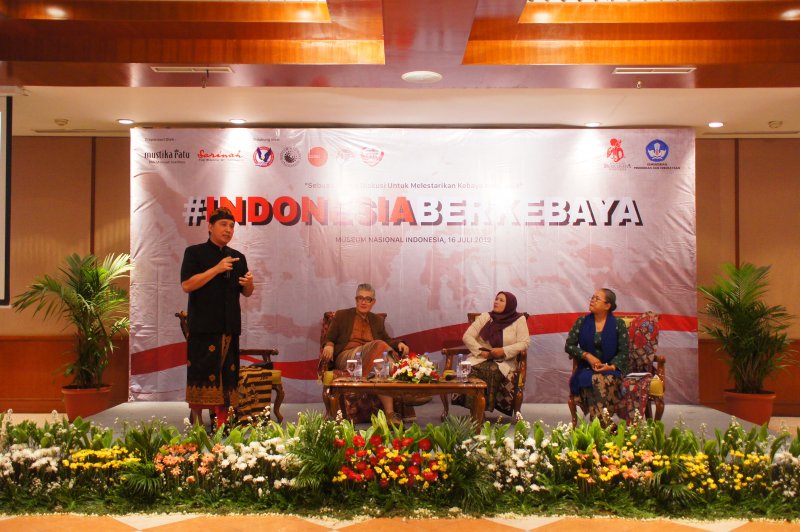 Students of UPH Communications (Ilkom UPH) and KPB declared the #Indonesiaberkebaya movement in the form a discussion room at Museum National Jakarta on 16 July 2019. Kebaya, as a symbol of Indonesian women, must be preserved. One way of preserving this is through Komunitas Perempuan Berkebaya (KPB) Indonesia, which has the focus of making Indonesia’s kebaya as a UNESCO Intangible Cultural Heritage.

The Discussion Room presented Director General of Culture of Kemendikbud RI (Ministry of Education and Culture of the Republic of Indonesia), Hilmar Farid Setiadi, Ph.D., who responded positively to the movement. Hilmar saw that the movement’s vision is good and nationalistic, focusing on the unity of Indonesia. Hilmar suggested that this activity should be held every year.

In addition, Designer of Busana Kebaya, Musa Widyatmodjo, also saw that a yearly event is imperative so that citizens will give more attention to kebaya and will wear kebaya more often.

According to Ribka Malise, Reinhard Santoso, Reina Sidharta, Joshua Putra, and Tiffany Geraldine of Ilkom 2016, #Indonesiaberkebaya movement was declared so that kebaya becomes a symbol of Indonesia and supported the plans of KPB Indonesia. Other than that, along with KPB Indonesia, students of Ilkom UPH did a study at the end of the event to convince the government to create a Hari Kebaya Nasional (day to celebrate kebaya).

Ribka explained, “When we first met KPB Indonesia, they stated that they needed a social media team to echo the kebaya movement. We suggested that other than a social media development, we need an event that will impact the people.”

Reinhard also said that the KPB Indonesia movement in prospering kebaya has spread to several cities in Indonesia, such as Yogyakarta and Bogor. However, the impact of this movement is still not felt by the citizens of Indonesia. Therefore, Reinhard felt that the discussion room event can be the means to unite the community, as well as receive support from the Indonesian government.

Reinhard added, “The idea of #Indonesiaberkebaya arose with the thought that kebaya can represent Indonesia. Kebaya, as traditional clothes, is not only found in Jawa, but we also found kebaya being used in Bali, Sumatera, Sulawesi, all the way to NTT with their pattern. Unfortunately, not many people know or use kebaya. We want this movement to have a wide impact and to invite the people to care about Indonesia kebaya.”

Other than a discussion regarding kebaya, there was also a fashion show event with 20 participants comprised of students of Ilkom UPH and members of the kebaya community. To provide complete information, there was an exhibition filled with information about kebaya in Indonesia.

In the future, five students of Ilkom UPH volunteered to keep on participating in the kebaya movement with KPB Indonesia.

Ribka said, “With our knowledge in branding, social media strategy, event management, campaign strategy, and other communications skills, we hope to take on the role. Specifically, with social media, we hope to create content and manage KPB’s Instagram and give strategic training on social media to the women of KPB.”

The event is a 9th-semester project of Ilkom UPH students through the CAPSTONE course, which is to push students in applying Communications knowledge so that it will benefit the community.